Join us for our Speaker Series on Thursday, May 10, from 7pm-8:30pm. Documentary photographer and videographer Liz Moskowitz will show some of her photographs. Liz received a grant from the Dallas Museum of Art to continue her photo project on East Austin churches; some of those images are now part of The Wittliff Collections. RSVP #LizMoskowitz #SpeakerSeries #HollandPhotoImaging #ATX #portraitphotography #storytelling
Brian Morrison

These tips will help you get photographs that are sharper and have more saturated color: 1. Use a tripod. 2. Wait for an overcast or cloudy day. 3. Position your camera's sensor so it's parallel to the most important plane of the flower. 4. Use a shutter speed of 1/200 or faster. 5. Find a flower with a good background. 6. Find a flower that's in good shape. 7. Use a telephoto lens with a short minimum focus distance. 8. Use the RGB histogram to check exposure - NOT the
Morgan Morrison 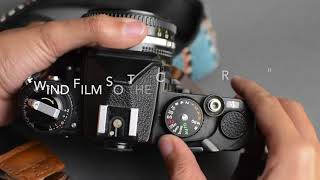 How to Load/Unload 35mm Film

Join us for our Speaker Series on Thursday, February 22, from 7:00pm to 8:30pm. Photographer and film maker Jared Moossy will show some of his photographs and short films and talk about his experiments with an Afghan box camera. RSVP here. #SpeakerSeries #JaredMoossy #photojournalism #Afghanboxcamera #HollandPhotoImaging #ATX #Austin
Morgan Morrison

Eric Gamon is our inkjet printing and photo/art finishing expert. He handles all of our fine art paper and canvas printing as well as our custom framing, canvas stretching, and print mounting services. In addition, Eric is skilled at using Photoshop, judges color at an expert level, and is a talented photographer. Hobbies include Harry Potter fandom (Eric has a real wand!). Film or digital? Why? Film, duh. The way film translates colors and tones is so lovely. Also, there is
Morgan Morrison

Our Speaker Series is back! Join us on Sunday, January 21, from 2pm-3:30pm. Adrian Whipp of Lumiere will demonstrate the process of creating
Holland Photo Imaging

Give the Gift of Lasting Memories

Hope you can make it!

Please stop by during our holiday open house - we'd love to see you! Everyone who attends will receive a custom holiday ornament created that day. If you'd like to donate, we're collecting personal care items, new socks and blankets, gift cards, and 2018 calendars for our neighbors who receive services from Meals on Wheels Central Texas. Holiday Open House Saturday, December 16 1pm-4pm ​ #holiday #HollandPhotoImaging #Austin #ATX

Join us on Thursday, September 21, at 7pm for our next Speaker Series with photographer Sandy Carson. Sandy Carson is a Scottish photographer who emigrated to the United States in 1993 to pursue cycling, and enjoyed a 15-year career traveling the world as a professional cyclist, where he honed his skills as a photographer. Sandy has exhibited widely, both nationally and internationally, including Houston Center For Photography, Lawndale Arts Center, Houston, The University of
Brian Morrison

Your Film Negative Are Valuable!

Before abandoning your film negatives in favor of a digital scan, consider what you're losing.
Morgan Morrison

Join us on Thursday, August 24, at 7pm for our next Speaker Series with photographer Wyatt McSpadden. A native of Amarillo, Wyatt began his career there in 1974 as the photographer for eccentric arts patron Stanley Marsh 3. McSpadden photographed the creation of Marsh’s Cadillac Ranch and chronicled the work’s evolution from local curiosity to state landmark. In 1992 he moved to Austin and turned his focus to editorial photography. His portraits of governors, golfers, musicia
Morgan Morrison

Holland Photo Imaging is now offering camera straps from Austin-based Purse & Clutch. The camera straps were produced using as many handmade processes as possible to help sustain as many jobs as possible. Purse & Clutch's mission is to help support sustainable, long-term employment for men and women with limited opportunities by connections to international markets. They take the guesswork out of whether or not an item is made responsibly. The artisan groups that Purse & Clut
Morgan Morrison

Join us on Thursday, July 27, at 7pm for our next Speaker Series. Pulitzer Prize-winning photojournalist Rodolfo Gonzalez has been working for newspapers since 1989 and is a former staff photographer for the Austin American-Statesman, working in Austin from 2000-2016. Gonzalez studied journalism, photography, and mass communication at San Antonio College in San Antonio, where he grew up. Gonzalez has worked at the San Antonio Light, Fort Worth Star-Telegram, Providence Journa
Morgan Morrison

Join us on Thursday, June 29, at 7pm for our next Speaker Series. Christa Blackwood and Lesley Nowlin are successful artists based in Austin
Holland Photo Imaging